What are gender pronoun and why do they matter?
more

What are gender pronouns? Gender pronouns are words people choose to refer to themselves in place of a proper name such as “she/her,” “he/him,” “they/them,” and “ze/hir” [pronounced zee/heer]. Gender pronouns match personal identity.

Individuals who identify as non-binary, genderqueer, or gender non-conforming do not identify with he and she pronouns. Many identify with gender-neutral pronouns like they/them, ze/zir, or hir/zir. 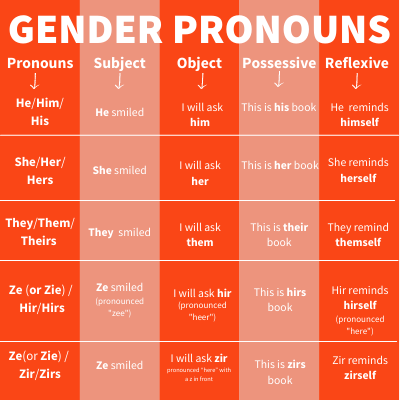 Why do gender pronouns matter?
An individual’s pronoun is often assumed based on appearance, behavior, voice, name, or stereotypes. However, gender identity is not always apparent and not necessarily tied to sex assigned at birth. Gender identity is an internal sense of self and can be man, woman, neither, or both. Making assumptions on gender identity can be incorrect and limiting.

YWCA Delaware’s Policy on Discrimination standards includes “refraining from any manner or form of discrimination and/or harassment, whether it is sexual, racial, religious or related to another’s gender, orientation, or disability.” Making the wrong assumption about someone’s gender identity by extension of their pronouns can be insulting and constitutes workplace bias or harassment if done repeatedly.

YWCA Delaware is a statewide organization that offers economic empowerment, health and safety, racial justice, and social advocacy in safe and stable environments. Above all, YWCA Delaware respects all identities and welcomes all to share their pronouns voluntarily.

How to ask someone for their pronoun? Try asking, “What are your preferred pronouns?”  or “May you remind me which pronouns you like for yourself?”